In the summer of 1970, my mother, sister, and I traveled from Victoria to Saskatoon, where Dad had found work as a farm hand. 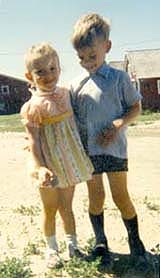 I think this might have been the first time that Kim and I had been on a plane, at least that I could recall. I remember a few things from our journey: the roar of the prop engines as I watched them in fascination through our small window over the wing, the ground far, far below, turning into small, flat squares of yellow, green, and brown, like some enormous patchwork quilt. 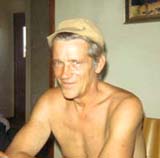 Dad had been working on the farm of Lou and Sally Hollic all summer, and when we saw him he looked sunburned and happy. He was a hand on their farm, working along-side Lou’s son Murray, but with their friendliness and hospitality, it seemed more like Dad was one of the family. Sally spoke in a loud, friendly voice that let us know that we were all welcome. In fact, they were probably the loudest, friendliest people I’d ever met!

Breakfast time at the Hollic farm was much different from what I was used to, if only for the variety and amount of food. There was eggs, bacon, pancakes, and the biggest boxes of cereal that I’d ever seen: Sugar Pops, Rice Krispies, and Corn Flakes. For a kid with a good appetite, this was heaven. After eating, Kim and I played with the puzzles and toys from the cereal boxes for what seemed like hours, and we had a great time.

Playtime was different on the farm too. The “playground” here was seemingly endless wheat fields and skies; the warmest golds and the deepest blues I had ever seen. The air was fresh and sweet and the sun was hot. It was perfect. Kim and I romped around the fields all day long in our bathing suits, playing broomstick ponies with a little blonde boy. It was a wonderful feeling of freedom.

Of course, this wasn’t completely Paradise – at least not for curious young children.

My sister Kim has always loved animals, even as a little tyke of two years old. One day, little Kim caught sight of this large dark shape contrasted against the sun-bleached side of the barn. It was “Lady”, a big, old female Black Lab that lived on the Hollics’ farm. In her excitement to greet Lady with a big hug, she jumped on her with both knees and immediately received a vicious bite to the nose. The next thing Kim knew, the blood started running down her face, the shock hit her and she started bawling her eyes out. Boy did the adults come running! Kim was quickly put over the kitchen sink, watching blood pour down the drain.

The scar on her nose is testament to this first bad encounter. She never lost her love for animals, but she certainly learned to approach “Lady” more carefully from then on. 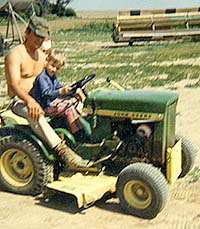 One day, Murray let me ride around on their little garden tractor. What fun! It was green and shiny and had “John Deere” painted on the side. I didn’t know who this “Deere” fellow was, but we had the same first name, and his tractor was lots of fun to ride. It’s engine rumbled loudly, which frightened me a little at first, but it seemed easy enough to control and it was really fun. Murray let me steer it from his lap, and around and around the yard we went. I felt like a real farm boy!

Of course, it wasn’t all fun and games for me. I had some serious exploring to do if I was going to uncover this farm’s many secrets.

This site uses Akismet to reduce spam. Learn how your comment data is processed.